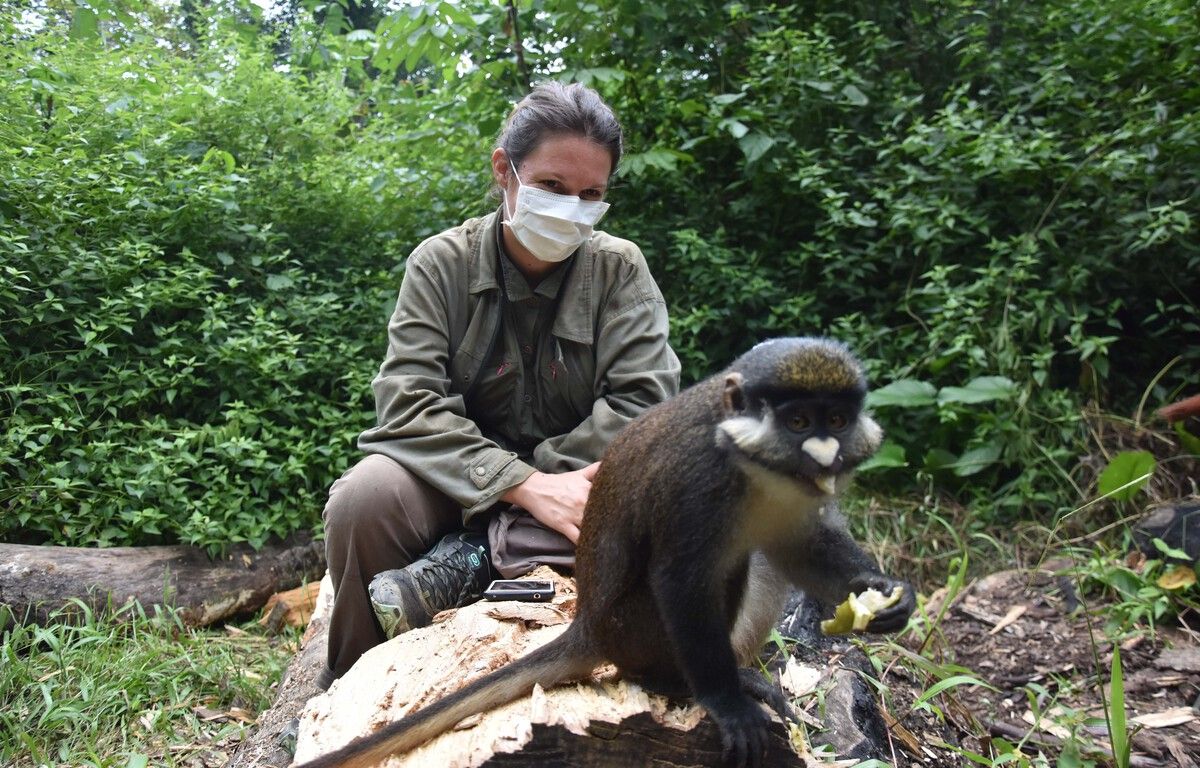 “I have always been connected to animals and nature. As a child, I cried when I saw trees being cut down. Born in Décines and having grown up in Meyzieu (Rhône), Amandine Renaud did not take long to want to revolve her life around environmental protection. “Upset” by discovering Gorillas in the mista film retracing the story of the American primatologist Dian Fossey, the young woman therefore dared to take the plunge at the age of 22 by volunteering to accompany a mission in the Democratic Republic of Congo (DRC) with great apes.

“For many things, I am of a fearful nature, evokes Amandine Renaud. But there, I dark because I wanted to see if I was really made for this life. And I had the click during this trip in 2003.” After having believed for a long time that only veterinary studies could allow her to “meet wild animals”, the Rhodanienne joined in 2008 a specific master’s degree in research in London, in order to to become a primatologist.

“Authorities thought the chimpanzees had disappeared”

With this diploma in her pocket, she created the P-WAC association (Project for Wildlife and Apes Conservation) in Décines in 2013, with the ambition of building her own center for the conservation of biodiversity and great apes. Then she settled for good in the DRC in 2015. Hosted in the province of Kongo Central, in the south-west of the country, she faced two years of administrative procedures to convince the Congolese authorities to allow the French association to “protect ancestral forests for future generations”.

And to better remunerate 20 Minutes, do not hesitate to accept all cookies, even for one day only, via our “I accept for today” button in the banner below.

P-WAC, which today has five active volunteers, plus 18 people working daily in the DRC, is gradually buying up 200 ha of land in the Mayombe forest, while opening a care center for monkeys. The effects are already striking, according to Amandine Renaud, who is now aiming for 2,000 ha.

“In 2015, the botanical study of the forest we were going to buy spoke of lifeless trees, of a place where man had plundered everything. Only a year after having forbidden access to this forest to man, we crossed antelopes, and we saw thanks to video recordings of chimpanzees and mongooses returning to the spot. Today, a group of five wild chimpanzees have returned thanks to this protection of the forest. This is very promising because the authorities thought that they had completely disappeared from the region. »

At the same time, Amandine Renaud takes care of a rehabilitation enclosure, where the objective is to protect young orphan primates who are victims of poaching in order to relocate them to the forest within a protected area. She is currently taking care of around twenty monkeys that were seized by the Congolese State and entrusted to P-WAC, some of whom have been particularly mistreated.

“We collected Mayélé, who was detained by an individual in Kinshasa, she says. He dressed him, made him smoke cigarettes, drink beer, and took him downtown or to the football stadium. He arrived really traumatized at our house. Things are better today but he had some complicated months. »

Although the 40-year-old primatologist now lives about ten hours’ drive from the DRC capital Kinshasa, she regularly returns to the Lyon region to “raise awareness in schools about deforestation and the conditions of monkeys”. “I saw 6-year-old children start a demonstration in their schoolyard to fight against palm oil and to save forests,” she smiles. The pupils of the primary school Les Calabres in Meyzieu even collected 1,200 euros by mobilizing. »

Contacted by the publishing house Michel Lafon, Amandine Renaud published the “militant” book on May 25 My fight for the great apes, prefaced by actor Maurice Barthélémy. “It allows me to clarify that I don’t spend my days petting monkeys,” she laughs. I come back to the whole course of the association and the difficulties I encountered when settling in the Congo, where I was a little lost at the beginning. Seven years later, the actions of P-WAC are recognized by many large foundations such as 30 Millions d’amis and the Brigitte-Bardot Foundation.

The book “My fight for the great apes” (Michel Lafon editions) is on sale here. More info on the P-WAC website hereas well as on the accounts Instagram and Facebook from the Association.